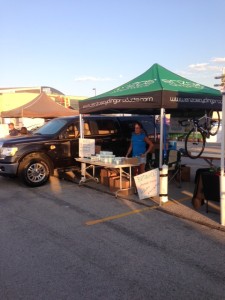 Enzo’s tent all set up at the Expo

I am packing the Enzo truck Thursday afternoon with large quantities of ButtonHole, Victory Lube, the Enzo’s canopy, and all the other crap you would take to a trade show. I also pack my bike because I have committed to race on Sunday, helping the team keep the Prairie State 35+ leaders jersey. Heidi and I leave Friday 9:00 am for Omaha/Council Bluffs, to work the Ragbrai expo prior to stage one. The idea is to expand the Enzo’s name with non chamois cream users. The funny thing is all of these riders NEED to use chamois cream, but their are many weird attitudes out there, with regard to protecting their junk! Why do so many people put their under carriages through such distress? Do they think this makes them tough enduring nasty chaffing in that area for 8 consecutive days of hot weather riding? 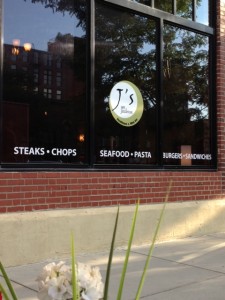 We arrive in Council Bluffs only to hit gridlock traffic, we make the quick decision to exit doing a few errands at the local Home Depot and Super Wall-Mart. I have to say, walking in this particular Wall-Mart was quite different than I am used to. While Heidi and I were entertained, I understand the squad car parked in front of the main door of this store! A few arguments about line positions by some of the entertainers, and the glacial pace of the check out staff were wearing on most of the customers. I found it all humorous, knowing the longer I was in the store, the more open the highway would be.

After checking into our hotel, which was awesome, we took the shuttle to the market district for dinner. After a nice rib-eye, we walk around the local shops, which are basically garage sales in a store atmosphere. Shelves of discarded junk with price tags! Lets just say you do not need to pay for concert, movie, or entertainment tickets when in Omaha, the people watching is quite entertaining and free. 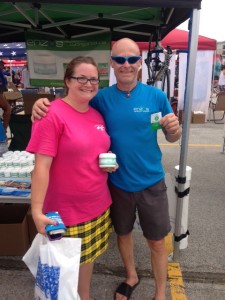 Saturday we would arrive at the expo and set up the booth by 9:00 with the show beginning at noon. The reason we set up that early is many people ride early and stop by the expo before the heat of the day, and we sold quite a few jars before noon. The other reason is I needed to do a pre-race ride before the main 9 hours of being a carnival weight guesser. Yes, step right up people and satisfy your ButtonHole, or protect you ButtonHole correctly right here, or do not let the long miles hurt your junk! You have to see it to believe it. Heidi was able to have groups that walked ten feet past the booth, have them turn around, stand for 10 seconds, then walk back to see what we had to offer! She is clearly a VanderKitten Carney, a women who kicks ass.

So the day is rolling by, I am cleaning chains for people as a demo for the Victory Lube, which worked. Every demo observed, there were numerous bottles sold. There were many dirt encrusted chains for me to choose from. I know you all wish you could have been in my shoes for that experience! It did seem to make people happy and grateful for my cleaning efforts. So I have that going for me, which is nice.

The clock has been moving at a steady pace though I finally reach my saturation point. Picture this, A guy standing 8 feet from the booth, refusing to come any closer, telling Heidi that he is going to ride all week dry, that he doesn’t mind his under carriage being abused. I am seated under the tent and retort, that is the least intelligent thing I have heard today! Heidi tells me to shut up and laughs, while the guy stands their not sure what to do or say. After 15 seconds he strolls away and Heidi treats me like a little kid, scolding me for my contempt. This is about 8:00 as I decide to start the tear down process. By 9:00 we are packed up and start to drive out of the circus known as Ragbrai.

Our day is almost over, NOT! We need to find some food, since our only option at the expo were meats on sticks or on buns. Bacon on a stick dipped in chocolate, Gator tail on a stick, pork chops on a stick, how are these people going to exist for a week of this? These food options force the choice to find food on the road. The 8 hour drive should put us in Barrington about 5:00 am. We finally stop for gas at 11:30 hoping eat as well. If American’s want to know why we have a huge health care problem in this country, just look at out highways! They a littered with worthless food outlets, food that has horrible caloric value. So you eat this shit, you may feel satisfied, though the fact is you have dumped a load of salty shit full or who knows what into your body. If you do this day after day, I suspect you become numb to the fact it is killing you from the inside out! So Heidi and eat a pile of shit, and drive on. 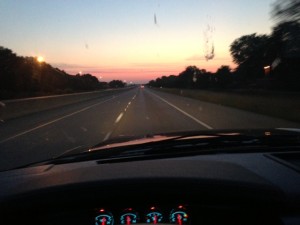 About 1:30 I am starting to see additional lanes on the road, not good I pull off for a quick nap at the next rest stop. The problem is the truck is packed to the gills, which means we have to sleep in the front seats. After an hour of this awful position, Heidi wakes me and says this is stupid, we are leaving. She tells me to change seats that she is driving. I do not understand because I was asleep. Apparently she was not able to sleep in the contorted position. I am now trying to sleep in the passenger seat while the pandora is cranking, which is twilight sleep at best. Two hours later about 4:30 we switch again and I close the deal to Barrington, arriving at the house about 6:20. I am in bed at 6:23!.

Sunday morning about 8:30 multiple texts to my phone wake me up, WTF. I hate texting anyway and I am so freaking numb I think there is some emergency, so I look to see what is up. It turns out it is complete bullshit, though now I am awake thrilled to have so many quality hours of sleep, TWO. My kids hear that I am going to race today, telling me how stupid I am being.They say just go look in the mirror! I know this is a dumb idea but my team could use the moral support, even if I do race like shit.

I am in some kind of stooper or dream state arriving in St Charles 2 hours before the race. I have to adjust brakes for my race wheels and know the haze in my head will slow this process. After warming up with 4 of the boys and talking about our plan, I change from my clinchers to race wheels. As I am adjusting my rear brake, snap, the bolt breaks! I have 20 minutes before the start of my race and no rear brake. Grab my bottles, gu’s and head to the SRAM neutral service tent. They are once again awesome, and replace my rear brake with another, getting me to staging perfectly on time. Thank you SRAM.

The start of the race is funny, with Burnham sending a guy of the front and blocking on lap one! I would normally not write about this but they had a good number of jerseys in this race and this was the only time that team worked together all day, during the first 5 minutes of a 70 minute race. Props to Tom Driver, Burnham, for throwing attacks later in the race. I work with a few others and reconnect the race, setting up Brian Karlow for a counter attack. The race chases him for a few laps then John Whipple counters. I really though we had a good shot with this move as the small group was gaining a time, with a little help from the other Holes. Heagney seeing the danger, throws a hard pull at the front for 3/4 of a lap and closes the move down.

I go to the back keeping an eye on the front of the race from there. I felt the race would stay together for a while, which it does. I start to feel the effects of no sleep and keep looking at the timer by the the start finish line, which has been set on zero’s the entire race? I am wondering when they are going to start showing laps? Yes I am riding drunk, since the lap counter is located in a different position, which I would never figure out! I still would like to know what the timer was there reading zero’s all day?

I see Dave Stone, who is riding at the back, like we do often. When he starts rolling up the side, signature Stony move before he attacks the race. I decide he is going to assess the front of the race. Huge mistake, Dave attacks and rides off the front with one other. Then two more go up the road and I thought Whipple was one of those. A few laps later, I move up and ask Bob how he is feeling, he says good but the break is gaining time! I say it is good because we have Whipple up there, that I like our chances. Bob says Whipple is right there. Now I see that I screwed up badly, and there are no Holes in the break. The gap is 25 seconds, and I go to the front to start bringing the race back. After 3/4 of a lap Whipple take a long tug and then nothing. I will not allow my guys to do all the work and I am wondering where the Burhnam guys are? They do not have anyone in the break and have numbers. They could send one or two riders up to the front helping make this a race, thus my earlier criticism. All I can say is we all have bad days, maybe their boys were all feeling like me today. Chris Black even says loudly, the race is up the road, moving to the front to help, but that is the end of the chase.

So now that the race is gone, I am still clueless how long we have been racing or what lap we are on, laughter!!! What a dumb ass, I feel like such pack fill! I hear Todd on the loud speaker say, Heagney is stuck in the middle of the field and there is one lap to go! This is bad since I am the last guy in the field. As per the team plan, if this was how the race played out, I needed to be at the front, starting the lead out train. I jump full gas out of turn one and pass the entire race on the right gutter, exiting turn two in second wheel. I take the front and keep the group at 30 mph, control the line leaving only one bike of space on the inside line for my guys.

What happens next is not good and I will not talk about this. The fact is the Team really screwed the pooch and we loose the overall because of this stupidity!!!

So that is that, The Prairie State series seems to go well but we have a bad taste in our mouths, only having ourselves to blame. Live, learn, and move forward!

Thanks again to SRAM for the awesome effort, taking care of my bike when I really was in a jam.

Next up is the ABD Winfield weekend. See you out there. Safe racing and riding.